This blog breaks down and analyzes one amazing picture book every month.  It’s one thing to read about the techniques that make a great children’s story, but in order to really master those techniques– it’s best to see them in action. 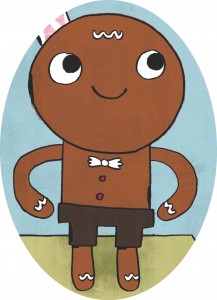 CHARACTER: There is only one main character and as is the case with many children’s stories, it’s obvious who this is because it’s in the title: The Gingerbread Man.  It is slightly unusual (but really cute) that the Gingerbread Man doesn’t quite exist as the story begins; he is being created, depicting the details of his generation, “I began in a bowl.  I was not yet myself…”  The children are baking him up.  And since most kids have heard some version of gingerbread man/person story, they already know that he is, in fact, a cookie.  If not, this story makes it all clear right away.

SETTING: Settings are generally fairly straightforward in picture books because of the, um, you know, pictures.  This book starts out with ample evidence that the story takes place in a classroom on the first day of school, a really good marketable setting. 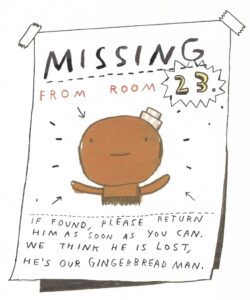 RISING ACTION: The Rising Action is the part of a story when the conflict builds, creating greater and greater tension.  In The Gingerbread Man: Loose in the School, the previously mentioned dual perspective allows the tension to build far more effectively than if the search was only one sided.  As the story is read, the child alternates between the action of the Gingerbread Man and the emerging details of the children, as each tries to find the other. 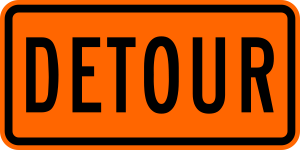 An important aspect to mention here is that this section of the story, the rising action, actually functions as a distraction.  This book was written based on a kindergarten unit that existed long before the book.  And in a brilliant move by its author, Laura Murray, the companion book was written for both teachers and as a stand-alone story.  Murray was a kindergarten teacher who used the unit in her classes.  What happens in the rising action is exactly what happens in a kindergarten class. Okay, not all of it because the Gingerbread Man can’t really wander the halls of the school looking for his class. But the class does, in both the story and the unit, traverse the halls looking (ostensibly) for their lost Gingerbread Man.  In a class full of nervous and apprehensive kindergarteners who generally find a big, noisy, unfamiliar school pretty intimidating, taking a tour of the school might be a little bit scary. But the reason this unit and this book are so successful is that the very act of searching for a lost gingerbread man functions to turn the child’s attention away from the self and all its problematic nervousness and focus it on the MacGuffin, the gingerbread man.  The fact that there is no rollicking, school-romping cookie is of no real importance.  The point of the exercise and the unit is to refocus that first day nervousness onto something productive.  And in case you missed the significance, the productive thing that is happening in all this gingerbread chasing is that the child is getting a tour of the school, something that might otherwise be a little scary.  As the class goes from room to room, nurse to cafeteria to art studio, ostensibly looking for a run-away snack, they are really just getting an important glimpse of the layout of the school.  This might not seem that significant, but think again.  This unit starts with the baking of a gingerbread man, an activity that incorporates measuring, mixing, and cause and effect. Then it moves to making posters to aid in finding a missing gingerbread man which includes detail specific drawing and coloring.  Then it moves to the execution of a full scale search for a gingerbread man which includes physical movement, geographical mapping, and following directions.  The children will be required to be vocal and explain to others the nature of their mission.  This is a whole day of focused, integrated learning that has the additional added of feature of redirecting first day jitters to an external goal.  The unit itself is a masterpiece, but the idea to make a companion book wasn’t any less ingenious.

Wish you’d thought of it?  Yeah, me too.

CLIMAX: This is the section of the story when the conflict is resolved, when all that building tension comes to fruition in a satisfying and reliable, yet exciting event.  In the case of The Gingerbread Man: Loose in the School, that event is the reuniting of the children with their Gingerbread Man.  The Gingerbread Man realizes that the children haven’t abandoned him, but have been looking for him all along as evinced by the posters hanging all over the school. 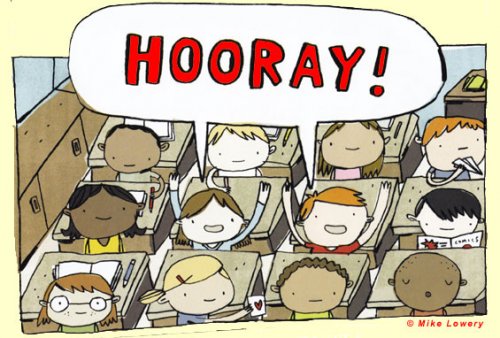 RESOLUTION: Picture book resolutions can be fairly brief, but his one is actually more of a segue into the next book.  The Gingerbread Man doesn’t get eaten (AS IF!) or anything.  He gets his own desk and gets to be part of the class.  I know Laura Murray well and when she first wrote this part I 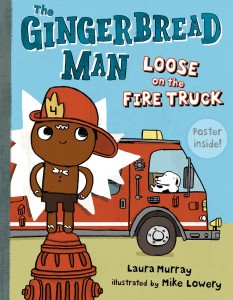 suggested that the story was fine just having the class and Gingerbread Man unite and leaving it at that.  But Murray had vision.  She didn’t take my advice and it’s a good thing she didn’t.  Because that little Gingerbread snack got not only his own desk, but a second book, too. Yep.  The Gingerbread Man just took a trip to the fire station and who knows where he could go from there. The point is that a resolution which is usually a closing, can sometimes be an opening.  Sometimes a character is bigger than his story.