A Rhyme Scheme is a pattern that describes where the rhyming words fall within a given stanza or verse.  Rhyme Schemes do not tell you anything about Meter or line lengths, they only delineate the number of, and placement of rhymed words. 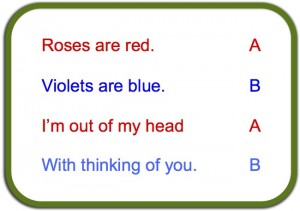 Rhyme Schemes are represented by letters.  Each letter in the Rhyme Scheme represents one line in the poem or story.  Repeated letters indicate Rhymes. The Box to the right shows an ABAB Rhyme Scheme. This indicates that there are two rhymes in the Stanza. The Rhyme denoted by the letter A falls on the first and third lines and the Rhyme denoted by the letter B falls on the second and fourth lines.

The “A”s represent the red/head rhyme.

The “B”s represent the blue/you rhyme. 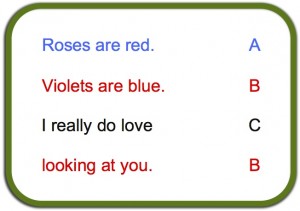 The box to the left shows an ABCB Rhyme Scheme.  The first and third lines do not rhyme, hence the use of different letters to represent those lines (A and C).

But the second and fourth lines do rhyme so the same letter (B) is used to represent those two lines.

For more on the structure of Rhyme Schemes see 202 Stanzas 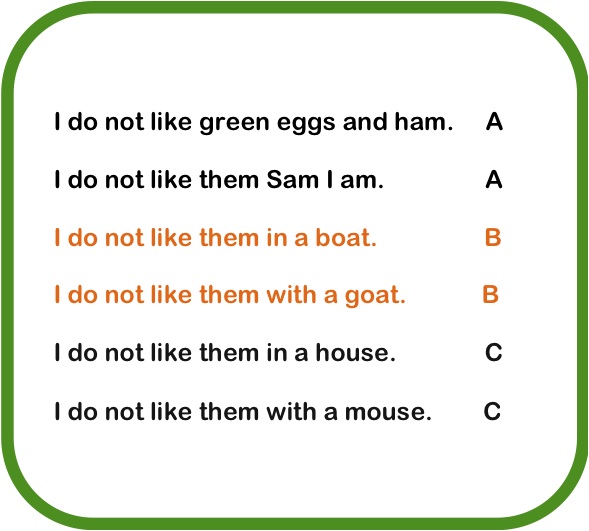 The most common type of Rhyme Scheme is the Rhyming Couplet.  A couplet is a two line Stanza, so there is only one place for those two rhymed words to fall.  Rhyming Couplets can be repeated or they can be mixed with other Rhyme Schemes for a more complex structure. The box to the right shows a series of Rhyming Couplets which are depicted like this: AA BB CC, etc.  Rhymed Tercets would be depicted like so: AAA BBB CCC.  The lines to the right are from Dr. Seuss’ Green Eggs and Ham (Random House, 1960).  Dr. Seuss wrote almost exclusively in Rhymed Couplets.  With couplets, the rhyme is more immediate and predictable, which is good for kids who have short attention spans.  The Meter here is iambic tetrameter.

A Rhyme Scheme is usually repeated in each Stanza of a given work, so if the first Stanza is an ABAB, generally the subsequent Stanzas are also.  But it doesn’t have to be.  Look at the Stanza below.  It’s from John Lithgow’s Farkle McBride (Alladin 2000).  The Rhyme Scheme is ABAAAB 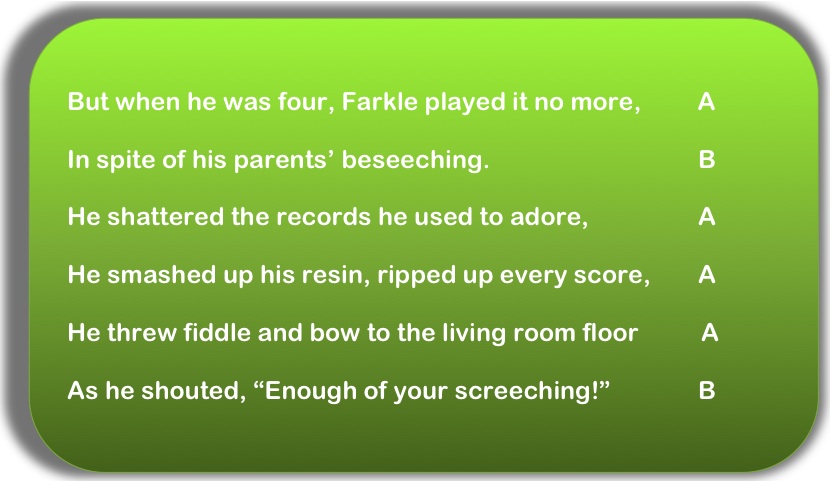 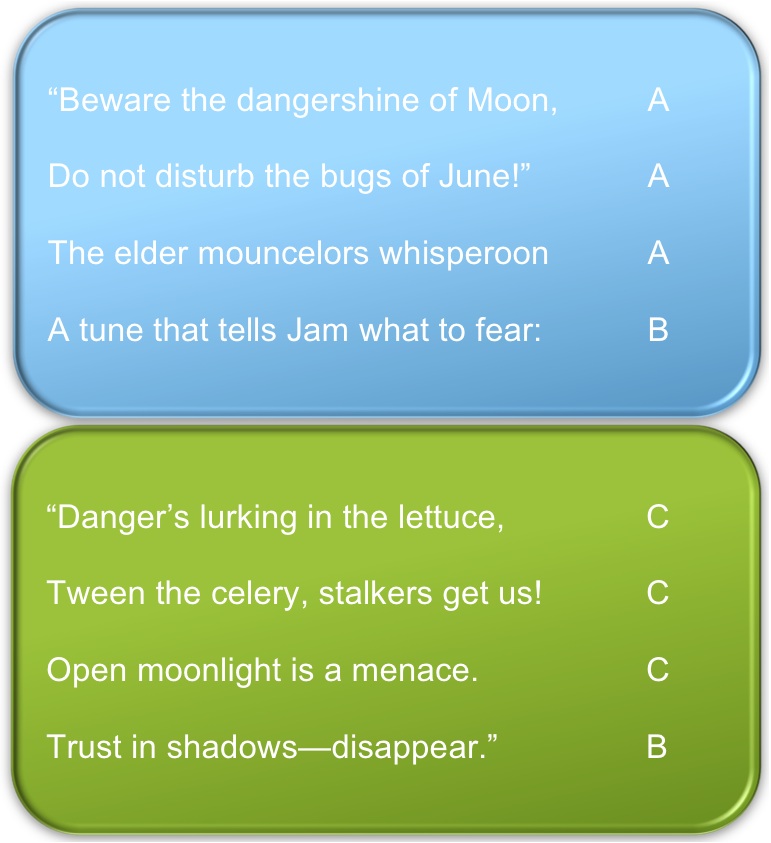 But in the story, Lithgow uses a pattern of  Rhyme Schemes that goes (more or less) like this: ABAB/ABAB/ABAAAB.  Those slashes represent Stanza breaks.  Every third Stanza in the book looks like the one above.  So, while you don’t have to repeat the Rhyme Scheme for every Stanza in your work, the key is STRUCTURE.  Your work should have some structure.  It can be as simple as Rhyming Couplets AA BB CC, or as complicated as Lithgow’s. 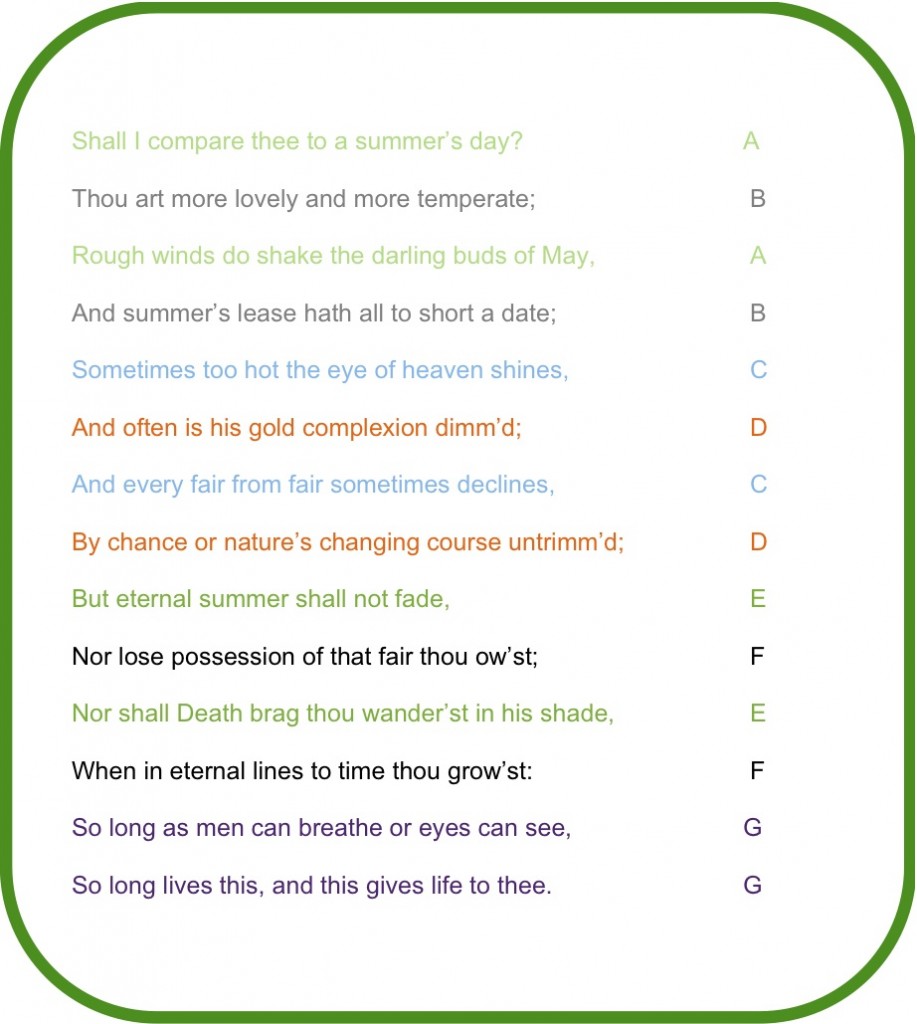 The image to the right is a Sonnet.  You don’t have to know the specifics of it, but know that there are several different types of Sonnets and they each have a different Rhyme Scheme.  Even though all sonnets have exactly 14 lines and they are generally written in Iambic Pentameter, many authors chose to invent their own Rhyme Scheme.  You can invent your own, as well.  This is a Shakespearean Sonnet and it might be Shakespeare’s most famous one. Of course, that is debatable. 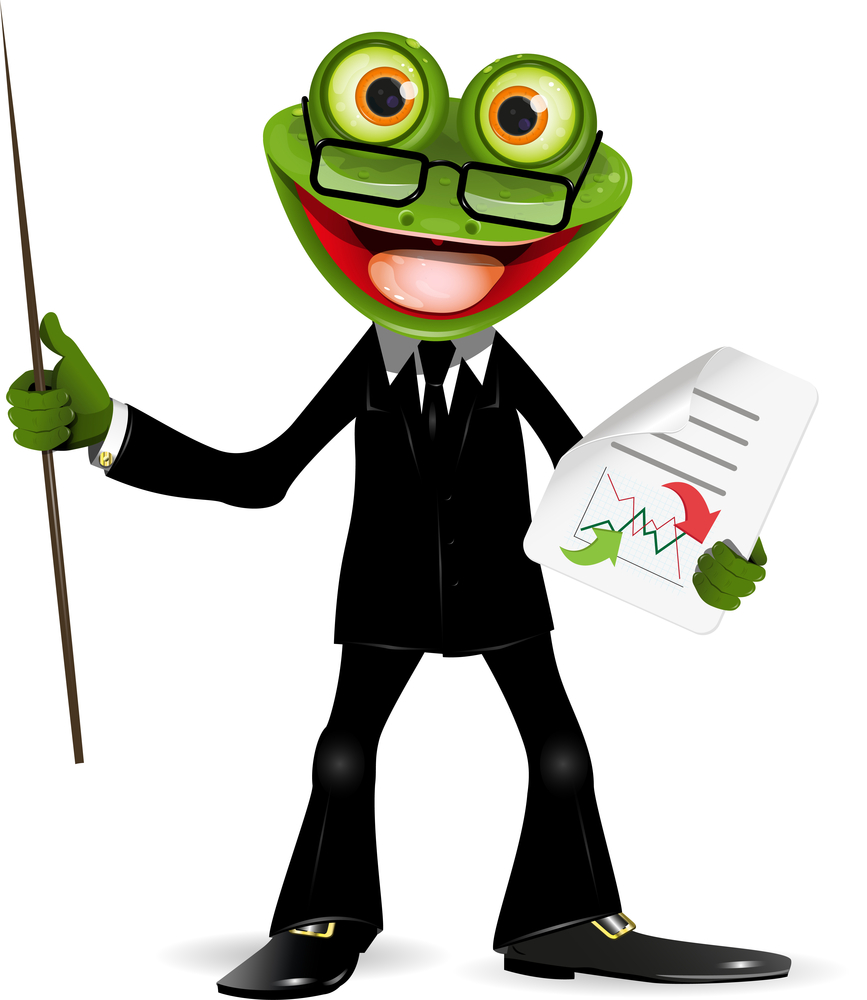